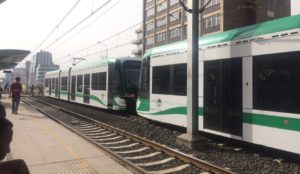 Ethiopia is in transition from an image of a poster child in need of global aid to one that is the manufacturing hub of Africa. Yet even with the enormous industrial growth, one would not miss the presence of the aging and battered white and blue taxis – Russian made vehicles transported to Ethiopia during the period of Derg era – on the roads of Ethiopia. The average age of the Ethiopian fleet is 15-20 years. One would no doubt also spot the high popularity of small hatchbacks like Toyota Vitz on the Ethiopian roads.

Small second-hand cars are in high demand for a good reason. With import tax of up to 220% depending on engine size, affordability makes owning a car a pipe dream for the majority of Ethiopians. As personal vehicles are perceived to be luxurious items by the government, cars face a heavy burden of 4 different cumulative taxes (excise tax, customs duty, surtax and VAT) during importation. Imported vehicles in Ethiopia may cost as much as three times the retail price of the same vehicles in neighbouring Kenya. Little wonder Ethiopia has the world’s lowest rate of car ownership, with only two cars per 1,000 person. Commercial vehicles, such as pick-ups, vans and trucks, have a lower tax rate than vehicles for personal use. As a result, the prices for luxury SUVs often exceed the cost of a commercial truck with trailer.

Due to high import tax, there is an emerging field of foreign companies manufacturing cars inside Ethiopia’s borders. In particular, in the past few years several Chinese manufacturing companies have opened factories in assembling vehicles using foreign imported parts. Producing cars locally allow manufacturing companies to avoid paying the 35 percent import tax that is applied to foreign vehicles, and offer consumers a cheaper product. Whilst the manufacturing market in Ethiopia remains small, this shift could potentially open up its automobiles market.

Those who believe that the Ethiopian government should reduce importation tariffs argue that old cars continue to be hazardous to the environment and consume more gas. Moreover, the current Ethiopian economy is forced to use its scarce foreign exchanges to import expensive vehicle parts. On the other hand, a low motorisation rate also translates to lower pollution and vehicle accident rates. Being a land-lock country, could high vehicle import tariffs deter Ethiopia from embracing the ideals of an industrialised vision? This will be an interesting question to be answered by this emerging manufacturing economy in the next 5-10 years.